Every Saturday the usual suspects show up at the Isle of You to play volleyball.  I use the term "volleyball" loosely though, since any similarity to the official game and the one played at Isle of You is...well...different.

Being different isn't always a positive thing.  We all remember our formative days at school, where any difference: wearing eye-glasses, being "fat", too tall, too short, too shy, being Mexican, being gay, not wearing the "in" clothes, not playing sports, etc., could make life miserable.  Most of us adapted to the harsh living conditions public school systems provided by blending-in.   The volleyball game played at Isle of You stands as a tribute to all the "different" ones out there who weren't able or willing to blend-in, and to all those, who blended-in until increased self-esteem, age, college and or combination of these factors. or others, resulted in the realization that I'm ok; you're okay.

On the black cinder court at Isle of You, (read I love You), it's okay to kick the ball over the net to avoid diving for the ball on a black cinder court when you're not wearing clothes.  There is a first aid kit on hand, however, if someone does dive.  It's also okay to wear clothes on every Saturday of the month except the first Saturday.  On that day everyone must be naked.  It's not as scary as it sounds.  In fact, it's liberating, especially when it's 80 degrees and humid.  The players are mostly gay, but the occasional hetero male braves the elements and joins the game.  So...yeah...it's okay to be straight.  One such hetero-sexually challenged individual and recent arrival to the Isle of You neighborhood was drawn to the game by the laughter he heard coming from the Isle of You property, (It is okay when playing the game to laugh at yourself, at others, or just because the breeze just tickled you somewhere the sun doesn't usually shine.)

As agressive primates, we are 99.99999% related to chimps you know, we are compelled to compete and the competition can, and usually does, take on a decidely destructive turn.  At Isle of You Naked Volleyball, however, the primates play less like the agressive chimp and more like the fun-loving bonobo.  Haven't heard of the bonobos?  The men of naked volleyball have devised a set of rules for volleyball that any self-respecting, fun-loving, bonobo would find difficult to understand.  After a while you give up trying to understand and accept and before you know it everything seems just as it should be.

If one team outscores the other team by nine points, then the "nine inch" rule applies and the lower score team serves until they make a point.  If you're new to naked volleyball the "princess" rule applies, (for a month), and you have three chances on your serve to hit the ball over the net.  Once you make a point during one of your times up to serve, however, the rule no longer applies.  See what I mean.  The rules go on and on and on and they're so confusing.   If one team pulls 13 points ahead of the other team, then the frontlines switch.  Sometimes this results in the lower score team catching up and sometimes winning, sometimes not.  Winning(?)...as it turns out, "the winning" doesn't result in much.  When you find yourself off the court and back into your usual routine, you realize it was playing the game that counted, not the result.  If a team gets too far ahead of the other, then each time the lower score team makes a point, they can then Tulverize the higher score team by subtracting a point from their tally.  This usually results in a longer game being played.  Another interesting rule involves a ball being hit over the net, but out of bounds and back onto the court after ricocheting off of a chair, roof, dog, cat, etc.  If a ball does that, then it counts, unless you remember the rule and kick the ball back over the net to the "other side".  Do you get the picture?  Finally,  there's the "Big Girl" rule.   When the teams are tied and a ball is in play and one of your team members calls "Big Girl", before actually hitting the ball, (but not always), then the ball can be hit any number of times before making it over the net and into/onto the other side's court.  When you follow this logic, you quickly(?) realize the volley could go on forever.  It doesn't.

Alas, as all good things, Saturday volleyball comes to an end.  The earth turns away from the sun and  the players unwillingly accept the lack of light and retreat to the comfort of the cooler and beer and other favored intoxicants.   We are in Puna, you know.  And for me, well...my stay at the Isle of You has come to an end, and so too my Saturday afternoons playing Naked Men's Volleyball. 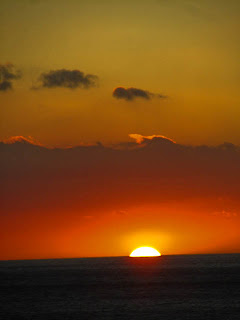 What hasn't come to an end though, is my better understanding of the game of volleyball,  my love for the Isle of You, Kelly and Normand, the hosts,  and all the rest of you who make the game what it is.  Here's to playing more like a Bonobo and less like a Chimp!  Aloha and Mahalo!!!

Puna is its own place for sure, Green lake Cape Kumakahi ride a wave at Pohohiki the tide pools of Kapho Hilo Bay longborading aloha spirit the gatherer